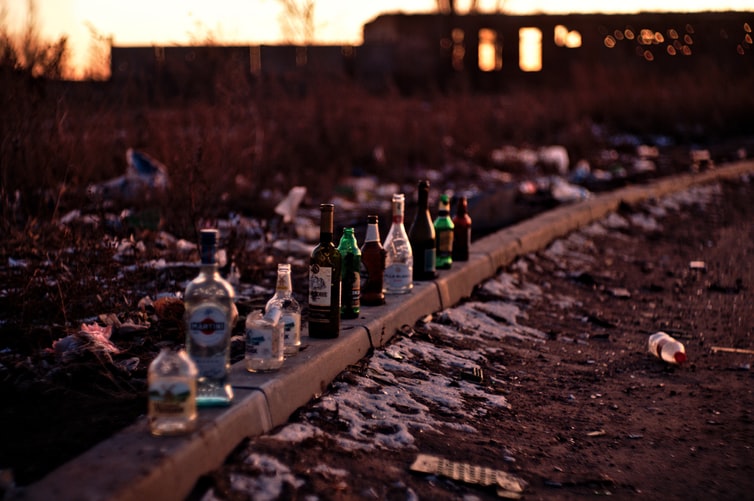 Alcoholism is a complex condition.
A lot of risk factors play a role
in the development of alcohol addiction.

When it comes to alcoholism, there are both internal and external factors that contribute to its development. Internal factors include genetics, psychological conditions, personality, and drinking history. External factors are the ones involving the family, environment, religion, social norms, culture, education, and job status.

Because there are so many factors to consider, it can be extremely difficult to predict whether any individual will develop alcoholism in the future. While it is certainly an individual’s personal choice whether or not to begin drinking, research suggests that the development of alcoholism is largely out of that individual’s control.

A general rule is that the more risk factors a person has, the more likely they are to develop alcohol use disorder—which is still not determinative. These risk factors can be best described as a puzzle. Putting it together is difficult, but it can paint a larger picture for individuals who suffer from alcohol addiction.

While there are many different risk factors that come into play when talking about alcoholism, studies have shown that no single factor has as much impact on a person’s chances of developing the condition as their genes.

The genetics behind alcoholism are extremely complex because the condition is not caused by a single gene, but rather a large collection of genes that interact with one another. At least 51 genes that impact alcoholism have been discovered.

The Role of Genes

Genes dictate many aspects of alcoholism. They influence how easily alcohol is broken down, how severe hangovers are, how alcohol makes an individual feel, and how much an individual seeks out risky behaviors. It also impacts how likely someone is to stop or continue drinking.

Beyond genetics, psychological factors also play an important role. Certain psychological conditions greatly impact the likelihood of someone developing alcohol use disorder or AUD. For example, people who suffer from depression, bipolar disorder, and social anxiety are more likely to develop alcoholism.

More than 40 percent of bipolar sufferers abuse alcohol or develop dependence. Approximately 20 percent of depressed individuals abuse or are dependent on alcohol. When a person struggles with mental health disorders and alcohol use disorder, this is referred to as a co-occurring disorder and they need to be treated at the same time through rehab.

Alcohol as A Coping Mechanism

Many people with mental health disorders turn to alcohol as a coping mechanism, albeit an unhealthy one. On the other hand, it is also possible for alcoholics to develop depression and other mental health conditions over time. Additionally, many psychological disorders affect a person’s judgment and prevent them from perceiving the reality of their drinking problem. Therefore they may ignore these warning signs.

Personality and personal beliefs are also considered risk factors, as well as the person’s attitude towards drinking. Some personalities are more likely to develop alcoholism than others. For example, people who engage in risky behavior are more likely to engage in heavy drinking. Someone who always wants to be the “life of the party” might become a heavy drinker in order to become more “likeable” when drunk.

People who are shy may also become heavy drinkers in order to reduce their discomfort in social situations. Studies have shown that a person’s expectations about drinking also play a big role, because those who have positive expectations are more likely to develop alcoholism, while individuals who have negative expectations may try to avoid it.

A person with a history of drinking may develop alcohol use disorder if they continue drinking. This means those who have recovered through rehab may still fall back into old habits. Drinking alcohol rewires the brain to desire alcohol, which causes intense cravings.

Genetics is only half of the equation. A person’s environment increases or decreases the chances of developing an alcohol use disorder. This refers to the family, the society, the city, the country, and the state they are in. In some countries and states, for example, it is much harder and more expensive to acquire alcohol.

Speaking of family, this is the unit that nurtures a person from the start, which means it plays a big role in likelihood of developing alcohol addiction. People who grow up in a family where heavy drinking is practiced or encouraged are more likely to develop alcoholism. In some families, drinking is not accepted.

Extending beyond the family unit, friends and colleagues are also primary influencers that can pressure or encourage excessive drinking or unhealthy drinking habits.

This also applies to much larger units of society, as drinking habits are influenced by the attitude of society towards alcohol. Areas where drinking is celebrated and encouraged tend to have higher rates of alcoholism.

For some people, religion is also a factor. Those who are strict adherents to religions that strongly oppose alcohol are less likely to become alcoholics. Other risk factors include age, level of education, and career. Teenagers, highly educated individuals, and people in certain professions have a higher risk of developing alcoholism compared to people from different demographics.

All of these risk factors add up into a complex puzzle that may or may not determine a person’s chance of developing a drinking disorder. While learning about these risk factors may not help prevent alcoholism, it paints a picture of how the condition develops, and how it should be treated. No matter how many risk factors are present in an alcoholic’s life, treatment is still possible.

How to Choose an Inpatient Treatment Center

While finding the right addiction rehab can seem overwhelming, help is available. There are plenty of resources available to help with the search. Finding the right one can go a long way in ensuring the success of the treatment. Visiting local rehabs and paying attention to the surroundings and the staff first-hand is a great idea to get a feel for the rehab facility’s atmosphere.

Asking about treatment methods, policies, and payment options can give the patient a solid idea on how things work in that facility. This will help them choose the right fit later on. There are facilities for certain demographics and preferences. There are programs designed for patients with co-occurring mental or physical illnesses. Loved ones can also try looking for online resources that provide the necessary information on different rehabs.

Most rehab facilities nowadays have websites or just hotlines people can dial to get more information. Admitting that there is a substance problem or addiction is never easy. Getting started on rehab can even be scary. But the short-term commitment that 30-day rehabs provide is one of its biggest benefits, and can really get one foot in the door for patients who are afraid of treatment. A rehab program lasting only 28 or 30 days is a relatively short time commitment, but the rewards of sobriety can be lifelong. If someone in the family is struggling with opioid or alcohol addiction, it is important to seek help.

A combination of medical detox and behavioral therapy can go a long way in the fight against drug abuse. But because every individual is affected by addiction differently, a comprehensive program tailored to their specific needs is necessary. Look for a nearby addiction treatment facility today and find out how drug treatment programs work.

Outpatient alcohol rehab is less focused, but more flexible. This means it has a higher chance of relapse, and that is why it is not recommended for those with long term addictions or severe dependence. It is perfect for those with more manageable conditions who want to continue working or could not stay in a treatment facility for 30 days for any reason. Because it is an outpatient program, it requires frequent visits to the treatment facility. Patients are encouraged to stay sober. Because it does not take the person away from their environment, they are still exposed to all the temptations and issues they were previously dealing with.

Rehab Is your best Chance